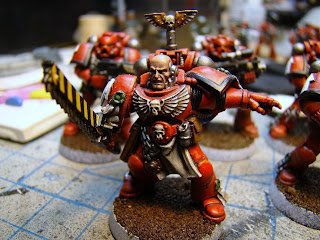 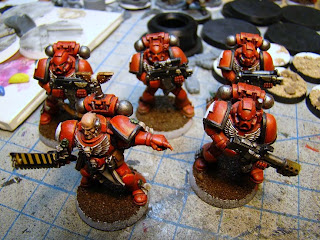 Sorry to all my viewers for the lack of updates. Recently being busy packing and moving. It's kinda hard to keep track of my projects while stuff is packed in boxes and in two different places at one time. I will be a little bit more settled in in about two more weeks or so. During that time I will try to post up much as I can with what I have available atm.
Anyway, I just wanted to get away from building the IG army for a bit and get some paint on the brush. I figured I would just paint up some AoBR marines to very good table top quality. I'm thinking about selling them, but not sure how much they would actually fetch me.
Soooo....this blog is to see what my viewers think. If you were to see these mini's on either ebay or online store, how much would you pay for them? Mind you that they still have some finishing touches that need to be done along with a more finished base. Plust the unit would be 10 man strong including a missile launcher (not shown).
Posted by Unknown at 10:23 PM 3 comments:

So it's been almost a week now and I've been pretty busy with moving to a new home. Working mornings and evenings fixing the place up and afternoons working at the job. :( I'm so tired and sore, but I wanna get the IG army built up before I start test painting and painting the army.
An update from my last blog entry with the 1750 list. I'm debating if I should take out some of the tanks and substitute it with a pair of either valkyries or vendettas. This would give me more transport capability and fire power from the both the multiple rockets pods and twin-link las canons. Your thoughts...
Here are some pics of the valkyrie/vendetta in progress of being built. 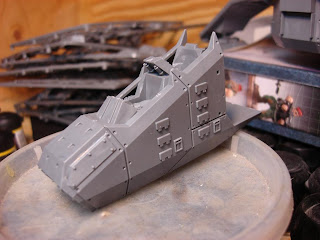 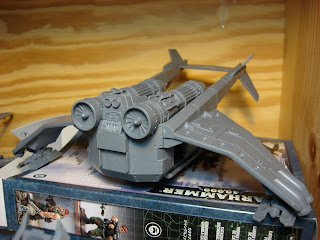 So with the release of the new IG Codex, I'm beginning to build my IG army. I haven't figured out exactly what it is that I want in the army, but I have a rough idea. This may all go in the trash after I play a test game and lose horrifically, but I never know. That's why I'm writing this to see what your opinions are on my army list so far.

The 5th edition having many armies go mech, I decided to counter that with a mech army as well. The standard IG Troop choice isn't going to be all that great. I mean the best choice of a troop slot is the veteran squad with BS 4. You get 3 special weapons with the unit and mounted in a Chimera, they can be both fast and deadly to opposing players vehicles. But with the amount of troops contesting objectives and kill points sake, I'm also planning on taking some big guns. And I mean some BIG GUNS!!!

Here is the list as it stands. May change after a game test or your opinions.

The idea is that I would have the 3 ordanance tanks in a corner or behind terrain with the two chimeras with camo netting on the sides to provide cover. The command unit and 2 of the veteran squads would sit back for counter attack. The other two veteran squads could try to claim objectives with the 3rd chimera providing support. Lastly, the 2 vanquishers would target enemy armor while the exterminator would target enemy transport vehicles or squads.

Sounds all great in my head, but I would have to play test the list to see if it can compete or not. My first thoughts are that I probably should lost a few tanks and get a few more veteran squads...but the thought and idea of so many templates blasting away at the enemy was too hard to resist. Your thoughts?
Posted by Unknown at 12:39 AM 2 comments:

As I promised here are some pictures I took of the GD entries from this year. All the models made it into first cut, but failed to achieve anything further. Hopefully by next year I can learn to tighten up my blending and work a little bit more on contrast to brighten the models up a little bit more for the poor quality lighting at gamesday. Hope you enjoy the pics and leave some comments for me :) Suggestions on making the models better would help too. 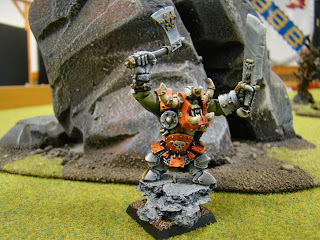 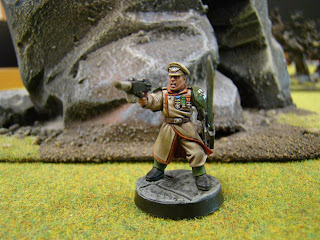 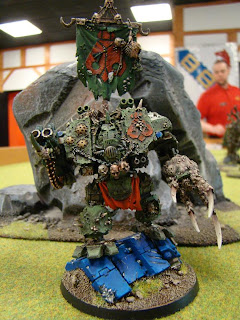 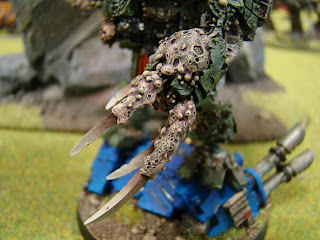 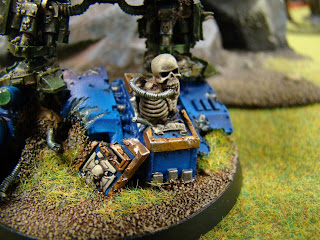 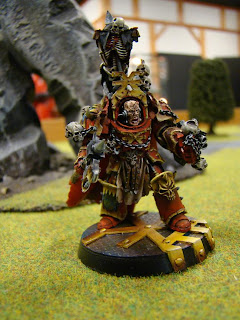 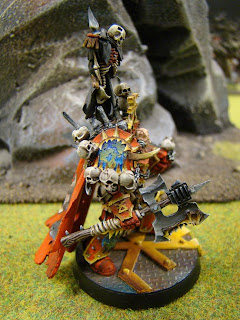 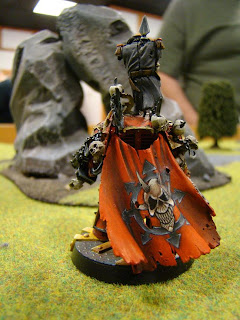 So I'm back after a pretty fun weekend. I got to see alot of great things and overall had a good time. Mostly because I was hanging out with the club members and browsing through other club tables.

Golden Demon entry was ok. I was able to make first cut with all four of my entries, but unfortunately fell short of any placing or even honorable mention. Lighting was horrible as usual and I felt that some of the models that won this year shouldn't have. There was ALOT of competition this year IMO than last year or the year before.

One of the greatest moments for me was being able to sit down with the great painters in the demon lounge and just sitting and chatting with them. I tried to pick their brains as much as possible about their styles and techniques. After a disappointing no win entry this year, I brought my Khorne Lord over and asked them about their opinions on what I can do to make it pop and stand out. To my surprise some of them were dumb founded that I didn't make even honorable mention, but all agreed that I needed just that one or two extra hightlights. Though I didn't win, in the long run I did because I felt that my piece was appreciated by even some of the greatest slayer sword and demon winners. There will always be next year.

I was also stoked that a fellow club memeber, i.e.- JAWABALLS made first cut with his BA honor guard. This was also the first time he has entered and I just wanted to give a shout out to say GOOD JOB JAWA!

BTW, in case you're wondering...I will have pictures up soon of my pieces as well as fellow club members pieces.
Posted by Unknown at 1:07 AM 2 comments:

Finally, after painting non-stop, I have finished painting my entries. I will be entering the Khorne Lord and also a Nurgle Dreadnought. I will take some pictures during Gamesday and post up either on Saturday night or Sunday night. I wonder how I'll do, but either way I am very happy with the turn out of my models. As I tried new techniques that I am not used too, this will be very interesting to see compared to some of the other models there.

If you get a chance while at Gamesday, stop by the table which is being run by Jawaballs and Fritz. I'll probably be there building and painting some mini's :)

Also now that GD entries are out of my mind, I will be back to painting and building all sorts of mini's and posting them up to show progress.

Lastly, for those in the NY area, if you haven't heard already...BFS located in White Plains is hosting a tournament on the 30th of May. 40 players are signed up so swing on by to check it out.
Posted by Unknown at 2:44 AM No comments:

Well, it's time to push for the finish line! GD is just around the corner and I have ALOT of work to still do. Below are some pictures of my still WIP Khorne Lord in Terminator Armor. I'm hoping that I just place top three with this model as it is the one model that I have spent the most time on and lots of lovin'. Maybe over 16+ hours so far and still some more to be done to finish. If I don't place...maybe an honorable mention or best of forgeworld would be nice :D

Anyways, enough yapping by me...I gotta get back to painting. Leave a comment pls. I love to read them and respond. 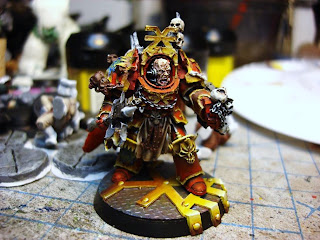 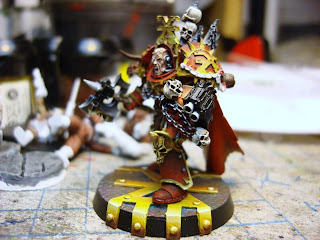 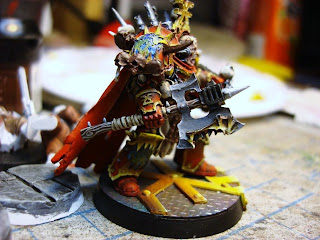 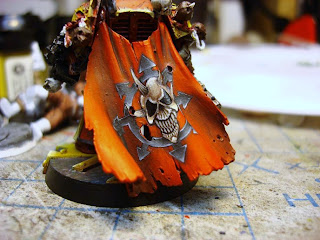 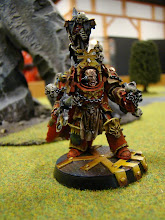 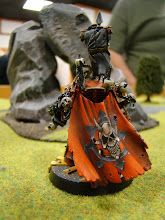 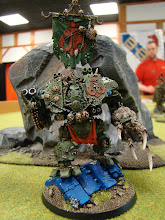 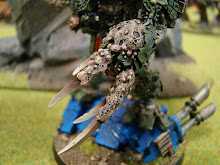 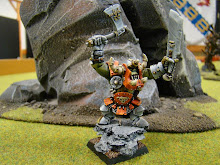